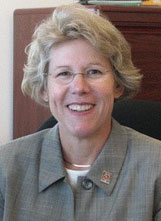 Terri Swartz, dean of the College of Business and Economics, has been recognized among the "Most Influential Women in Bay Area Business" by the San Francisco Business Times. The publication included her in a special section of the April 23-30 edition which was published last Friday.

"Each year, the task of narrowing down the list is more challenging. That's the good news, and we're proud to say the Bay Area is home to a rich and growing network of exceptional women leaders," said Mary Huss, the Business Times publisher, in her introduction for the special section. "This publication honors top women executives in corporations and large public, nonprofit and government organizations within our coverage area (the counties of San Francisco, San Mateo, Marin, Alameda and Contra Costa)."

In her profile, Swartz said that "leading the recent turnaround in the College of Business and Economics and building a team to take us to new heights" is her "proudest professional accomplishment."

Each of the 145 women featured by the Business Times was asked for the advice they'd offer to young women. Swartz said: "The only limits you have are the ones you place on yourself."

Swartz, who took over leadership of CBE in July 2007, had responses for "strategy for sucess in a tough economy" (Work together, stay focused and don't try to be all things to all people) and "what makes you influential" (I try to make a difference in my corner of the world and empower others to do the same).