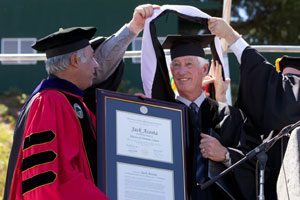 It was a "deeply grateful" Jack Acosta who accepted an honorary Doctor of Humane Letters degree from Cal State East Bay during commencement ceremonies for the university's College of Business and Economics June 12. Acosta is a longtime Bay Area businessman and philanthropist who has been a major supporter of higher education, especially Cal State East Bay, and is a member of the university's educational foundation board of trustees.

In his June 12 commencement remarks, Acosta praised the university for "becoming a regional center of innovation and a gateway to educational excellence."