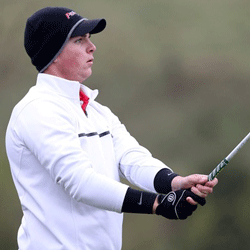 A.J. Hebert made Pioneer history on Tuesday by sinking an ace on the 17th hole at the CCAA Championships. (by: Kelley Cox)

Hebert's ace is the first by a Pioneer golfer in competition since the program was revived in 2001. The left-hander played an 8-iron off the tee at the 181-yard hole, carrying a water hazzard, landing the ball just a few feet past the pin, and spinning back in. Hebert had previously missed an ace by about one foot on the 12th hole. He finished that first round with a total of 73 (+1), and then followed that up with an 81 (+9) in the afternoon. The junior was in 28th place at 153 (+10) with one round to play.

You can listen to an interview with Hebert following that followed his big accomplishment April 22 on the Pioneers' Soundcloud page.

Freshman Adam Stone carded the squad's best second-round score with a 74 (+2), giving him a total of 152 (+9) for the day. Stone is just ahead of his teammate in 27th place after one day.