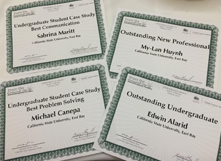 A Cal State East Bay staff member and three students were recognized recently at the Association for Orientation, Transition, and Retention in Higher Education regional conference in Fresno.

The Regional Student Leadership Award gives special recognition to students for their creativity, energy, enthusiasm, and outstanding abilities — the backbone of successful and dynamic orientation programs. Two students may be selected from each region per year; one student from a four-year institution and one from a two-year institution.

Huynh and Alarid were recognized with certificates at the event. Huynh will also receive a plaque, and Alarid was awarded a plaque and a $100 gift card to the campus bookstore.

Although Huynh nominated Alarid, she was completely unaware that Marguerite Hinrichs, CSUEB director of Student Life and Leadership Programs, had also nominated her for the Outstanding Professional Staff Member.

“My-Lan has committed her time, energy, and passion for student orientation, retention, and transition in ways that have transformed the perception of CSUEB from a ‘commuter campus’ to a first-choice institution,” Hinrichs wrote in her nomination letter. “Cultivating student leaders into potential Student Affairs professionals is My-Lan’s specialty. She has transformed the CSUEB Orientation Team into the premier student leadership organization on campus by providing transformational leadership experiences for our students, programming every element of the leadership program with intention.”

Huynh wrote in her nomination letter, “Edwin, in his third year as an orientation team leader and second-year intern, continues to inspire his peers to make a difference in the CSUEB community and beyond, through his passion for orientation programs.”

Huynh explained the foundation for creating a successful retreat, and Hinrichs spoke about the role of social media in orientation programs.

About the Association for Orientation, Transition, and Retention in Higher Education:

The association provides education, leadership and professional development in the fields of college student orientation, transition, and retention to create a community of practice that defines and enriches the fields of orientation, transition, and retention. Chartered in 1976, today it is an international association comprised of professional administrators, students, faculty, and related organizations.