On September 17 and 18, 2021, Cal State East Bay will host its annual Fall Student Leadership Conference! Workshops and sessions will cater to new students and returning leaders. All CSUEB students are welcome! This year's 2-day conference is a hybrid model - September 17 features virtual sessions from 10 AM - 4 PM; September 18 features an in-person Keynote Session and lunch from 11 AM - 1 PM (space is limited for in person event).

Please contact Student Life and Leadership programs if you have any questions at studentlife@csueastbay.edu. 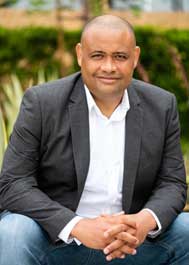 We are bringing Joshua back in-person! We had such great feedback for our virtual leadership conference and we wanted to have Joshua come back in-person to speak with our CSUEB student leaders!

Dr. Joshua Fredenburg is an internationally acclaimed speaker, author of five books, leadership/diversity consultant, member of Phi Beta Sigma Fraternity Inc., Tedx Speaker, and President/Founder of the ‘Award Winning Circle of Change Leadership Experience that specializes in helping students discover the leader from within, lead and interact with diverse groups of people more effectively, reach their fullest potential as a leader, and build the confidence and inspiration needed to make a positive impact in their community, nation, and world!

For the past fourteen years, Dr. Fredenburg has not only served as a keynote speaker in 47 states across the country, but he has transformed the lives of thousands of people as a keynote speaker, workshop presenter, trainer, and facilitator at different conferences, retreats, and training that revolve around leadership, diversity/inclusion, student success, new student orientation, professional development, fraternity and sorority events, and college graduations.

In 2018, Dr. Fredenburg received an honorary membership from Golden Key International, was recognized as a Top leader under 40 in South Florida in 2017, had his national leadership conference selected by the NASPA (Student Affair Professionals in Higher Education) Student Leadership Programs Knowledge Community as the “Top Student Leadership Development Program in 2015”, and he received a community leadership award from the Urban League Young Professionals of Los Angeles for his work in developing the next generation of leaders in 2015 as well. 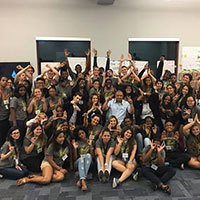 In addition to a successful speaking career, Dr. Fredenburg received his Doctoral Degree in Organizational Leadership from Nova Southeastern University in June of 2019, attained a Master’s Degree in Organizational Leadership from Biola University in 2008, has appeared on various television/radio shows, and is the President and Founder of the Circle of Change Leadership Conference.  The Circle of Change Leadership Conference is an award winning national leadership conference in Los Angeles and New York that prepares diverse and first generation students for career leadership success and connects them with executives from companies such as Pepsi, Columbia Pictures, Hewlett Packard, CNN, UPS, MTV, Mattel, Starbucks’s, VH-1, Verizon Wireless, NBC Universal, IBM, Warner Brothers, Chipotle, Disney, and Fox to name a few.

Dr. Fredenburg’s academic accomplishments, scholarly research on leadership, business success, and positive impact as a mentor of the next generation of leaders has positioned him to provide great value, empowerment, and inspiration to campuses that desire to have him serve as a a keynote speaker, workshop presenter, trainer, and facilitator for their different campus programs.